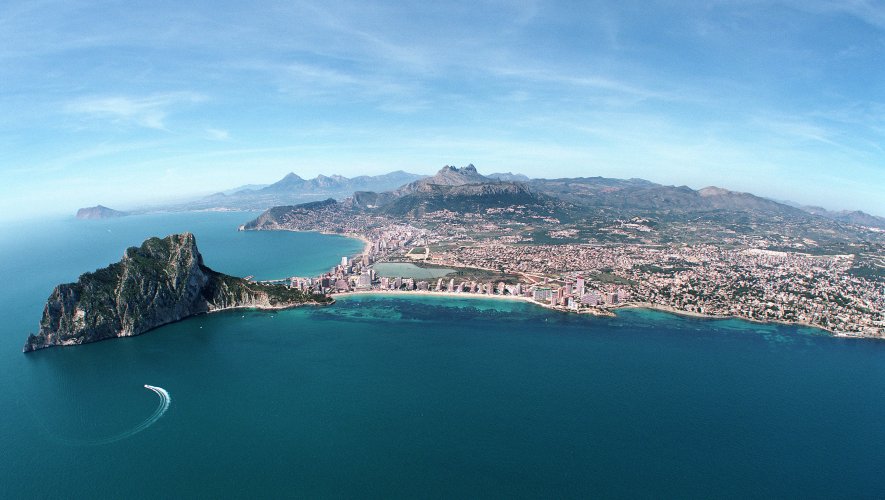 Calpe Is A Stunning Destination

CALPE, IN Eastern Spain, is in many senses defined by its iconic Gibraltarlike rock; a rock that is in fact twinned with Gibraltar in terms of both its name and its history. Both were originally Phoenician trading settlements, with Gibraltar’s original Phoenician name also having been Calpe (thought to be an ancient Phoenician word for describing a large rocky outcrop). When the Phoenicians were forced to abandon Gibraltar due to pressure from their trading rivals, the Carthaginians, they moved their trading activities further north and established a base at present day Calpe, which they named the Calpe of the North, ‘Calpe Ifach.’ Over time, with the original Calpe’s name having been changed to Gibraltar, the name of Calpe Ifach became abbreviated to Calpe, with ‘Ifach’ surviving as a name only for the rock itself. In the early days of its history as a settlement, the ifach rock was as important as the rock of Gibraltar as a defensive bastion. Any settlement, such as the Phoenician one, built in its lea, was defended from the seaward side by the massive bulk of the rock itself and from the north and south by the sea, leaving only its western edge at all vulnerable. The rock’s heights also served as a wonderful lookout point. The only drawback was the relatively small area of land to build on.

MOVING ON THROUGH TIME

During the ‘Pax Romana,’ when the might of the Roman Empire brought relative peace, prosperity and stability to the Western Mediterranean, the need for such an impregnable defensive position decreased considerably, and a Roman settlement extended into the coastal area between the rock and the present day hill top town centre. As it was to remain for many centuries afterwards, the main industry of the town at the time was fishing. This is evidenced by the discovery of salt flats at the base of the rock (salt obviously being used for the preservation of catches) and a little further to the south, and extending into the sea, the discovery of the remains of a sizeable fermented fish sauce factory. Roman fermented fish sauce was known as Garum, and was one of the most popular food items in the Empire, hence a very profitable item to manufacture (Garum factories have been located at many points along the Spanish shoreline). Much of Roman Calpe remains to be excavated, however many interesting artifacts currently housed in the Calpe Museum amply attest to its significance.

With the dissolution of the Roman Empire came chaos, conquest, and extreme insecurity, hence the need for a relocation of the focal point of Calpe to a higher, more defensible position. The rock itself was now no longer an option due to the need for space. A seafront location would also render the settlement vulnerable to attack from pirates that marauded in the Mediterranean for several centuries, so a fortified citadel was eventually constructed on a hill top, slightly inland from the sea. This medieval citadel was originally constructed by Moorish invaders but was later occupied by a variety of Christian forces and at one stage even by the very pirates that it was constructed as a defense against. Although only small, segments of the original walls remain, together with a single gate and a single tower, the street plan of the atmospheric old town of Calpe is very much ‘as was,’ with narrow lanes, small squares, and intimate alleyways predominating. Within these lanes and alleyways, in the later more stable Middle Ages, a fascinating form of sport evolved, that eventually became the emblematic home-grown sport of the Valencian region, ‘Pilota Valenciana.’ This was originally played in straight walllined streets within town or city walls, with players competing in a sort of raquetless, netless tennis match in which buildings’ walls, windows, doorways and other street features would all come into play. Because of changes in town centre layouts, although this game is still occasionally played in the streets, dedicated indoor facilities resembling medieval streets have now been constructed in many places in the Valencian region. Charmingly, they are still referred to as ‘carrers,’ or ‘streets’ in English. In Calpe, which now has one of these purpose-built indoor streets, there is a fascinating little museum dedicated to this sport.

For several centuries, little then happened that would radically alter the look of Calpe until the mid-20th century tourism boom, when its focal point shifted well away from the remnants of its ancient walls to its beautiful sandy beaches. At this point, a modern tree-lined boulevard was constructed to link the old town (‘ciudad’) to its beaches (‘playas’). A major player in the tourism sector also emerged at this time in the form of Unitursa, a construction company turned holiday accommodation provider that constructed the resort’s most emblematic 20th-century hotel, the beachfront Roca Esmeralda, in 1991. Several holiday accommodation unit constructions later, and by now the resort’s leading tourism enterprise, Unitursa embarked on by far its most ambitious tourism construction project to date in 2006, when its beautifully designed and appointed flagship hotel, the Diamante Beach, was built.

This hotel features an extremely high quality of bedroom appointment and houses both one of the Costa Blanca’s leading spa facilities and most elegant and flexible conferencing facilities. Put quite simply, Unitursa were aiming at undiluted excellence in its construction. The name ‘Diamante’ means ‘diamond’ in Spanish and, reflective of the multi-faceted excellence that the company was aspiring to achieve, it celebrated the opening of the Diamante Beach with several weekend draws for guests with real diamonds offered as prizes. Since opening, the hotel has become a reference for physical build quality both within Spain and internationally, having recently been incorporated into the Great Hotels Of The World selection on the basis of its fine facilities. In recent years, the superlative quality of these facilities have attracted many prestigious events to the hotel, including government meetings, NATO conferences and national leisure events, such as beauty pageants. Personal Touch Holidays has maintained an extremely close relationship with the Diamante Beach since its very construction, utilising it as its principal base for both bowls and dance holidays on the Costa Blanca. Because of the closeness of this relationship, the terms and conditions the customers enjoy at the hotel are exceptional, and it offers wonderful value for money. In addition to its excellent physical qualities, the hotel provides easy access to both the beautiful Levante Beach seafront promenade and a wide variety of shops, restaurants and bars.

Calpe is ideally suited to mature travellers in that it offers physical beauty, a wonderful beachfront experience, a charming historic centre and a peaceful ambience that nonetheless offers full resort facilities. Fascinating excursions available from the resort include the historic city of Valencia, the delightful former Moorish mountain valley kingdom of Guadalest and the world class dance and cabaret shows that are staged at the nearby Benidorm Palace.

Having been obliged to temporarily suspend its operations at the Diamante Beach in 2013 whilst the hotel was undergoing architectural changes to its spa facility, Personal Touch Holidays is delighted to be returning to the hotel as its main 2014 Costa Blanca bowls holiday base. Should you be interested in enjoying a bowls holiday based at the 4-star Diamante Beach in scenic Calpe in 2014, please contact a member of the Personal Touch Holidays travel advisory team or give us a call. All of our team members have stayed at the hotel and know it very well. It’s one of our very favourite holiday destinations.