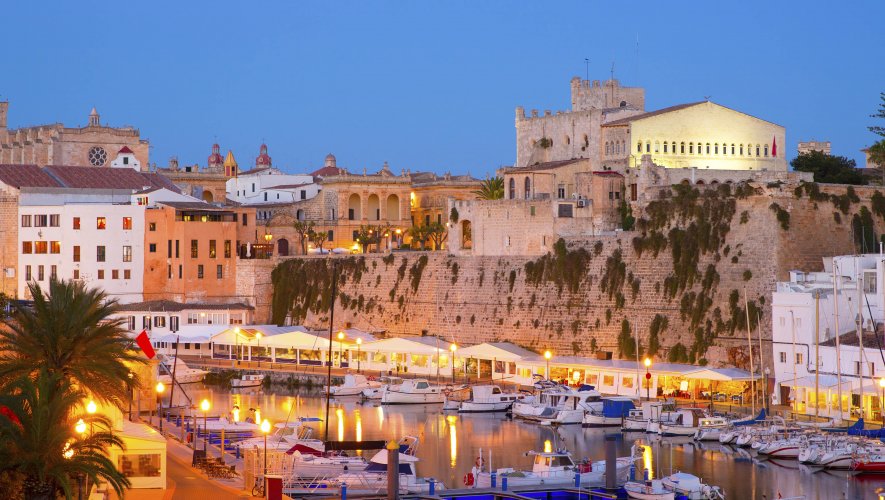 Though the second largest of Spain’s Balearic Islands, Menorca has successfully resisted the ravages of mass tourism to the extent that in 1991 its government was still able to declare nearly half the island as ‘of special natural interest’, thereby protecting it against any future development. The island in its entirety was then declared a protected ‘biosphere reserve’ by UNESCO in 1993. Scenically, unlike its neighbour Mallorca, it is characterised by gentle rolling hills and wonderful natural harbours rather than by mountains, plains and a dramatic coastline.

With most of the island’s small population resident in one of the only two towns of any size, Mahon and Ciutadella, much of its area is given over to nature, agriculture and the cattle that produce its famous cheese.

Articulated by over 15,000 kilometres of attractive dry stone walling, this pleasing undulating landscape is home to one of Menorca’s most unique and defining characteristics, a remarkable selection of highly characteristic prehistoric monuments, dating back to at least 2000 BC. Well preserved villages, fortifications, altars and burial chambers all fascinate, the best known examples being the Naveta Des Tudons burial chamber, thought to be the oldest roofed building in Europe, and the beautifully located prehistoric village of Talatí De Dalt.

At either end of the island, in the far west and far east, deep well-sheltered natural harbours have given birth to historically significant ports that have become the island’s main centres of population.

The first to develop was Ciutadella, in the west, offering the most direct access both to other islands and the European mainland. Designated the capital of the island under both Moorish and Catalan rule, it retained its status for over 500 years, until Menorca became part of the British Empire in 1708.

Recognising that the much larger, much deeper and equally defensible natural harbour on the eastern coast of the island might serve as a base for their entire Mediterranean fleet, the British nominated Mahon as their capital city in 1722. Consequently Ciutadella was frozen in time as an elegant, essentially Catalan, historic city, whereas Mahon burgeoned into a more modern British influenced city, featuring many fortifications and a fair amount of Georgian style architectural detail.

Both this British influence and association, and the island’s natural beauty and tranquillity have led to a large number of British people adopting Menorca as their home, especially in retirement. This in turn has eventually led to the construction of a bowls green and the formation of the Menorca Bowls Club.

The home of the Menorca Bowls Club is the south eastern resort of S’Algar, where an extremely enthusiastic and highly sociable membership of 60 plus people bowls three times a week. The club’s setting is highly attractive, benefiting from sea views, mature palm trees, a copse of Mediterranean umbrella pines and a variety of shrubs and flowers. The clubhouse too contributes to the charm of bowling at S’Algar. Not only is it pleasantly decorated, but it also features a wonderful terrace from which the bowling green, its surrounding flora, and the Mediterranean beyond can all be enjoyed.

To the left hand side of that view, only 200 yards or so from the bowling green, stands the resort’s premier hotel, the 4-star Hotel San Luís. An elegant hotel with a large outdoor pool and a spacious open-plan lobby lounge bar, it offers both local and international cuisine in its main buffet restaurant and pizzas and pastas in its poolside Italian restaurant. Its rooms are comfortable and well maintained, and half of them offer wonderfully open views to the Mediterranean.

For those wishing to explore more of the island when not bowling, a range of optional excursions departing from the hotel is offered, and a regular public bus service also links it with Mahon, which is particularly useful for anyone looking to shop or attend Mahon’s twice weekly market. Also of interest in the locality, and totally unique to Menorca, are the weekend trotting races that take place at a race track on the S’Algar side of Mahon. Trotting is essentially pony and trap racing, and attending is a fun way to immerse oneself in local life.

Bowls holidays for both individuals and groups based at the Hotel San Luís are currently available exclusively through Personal Touch Holidays and begin at a price of £479 for a week’s accommodation on half board, including flights, transfers, porterage, a welcome meeting, 4 bowls matches, an included half day excursion featuring a cruise of Mahon Harbour and a tour of Fort Marlborough, a farewell drink and the services of a Personal Touch Holidays representative.