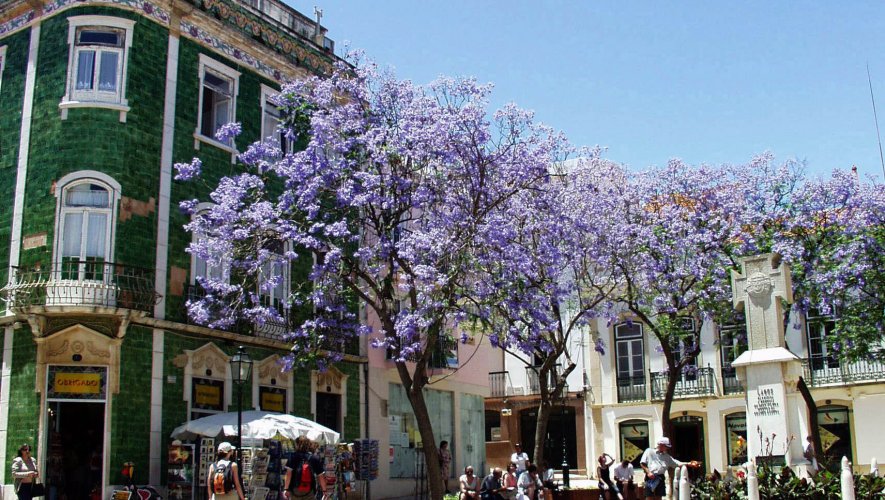 Traditional Architecture In The Historic Centre Of Lagos

Lagos, in Portugal’s Eastern Algarve, is a holiday destination that many travellers actively seek out, many return to time and time again, and many, once their travelling days are done, choose to retire to.

No single quality or characteristic underlies this allure. Rather, a delightful cocktail of positives with ingredients to entice a wide variety of people accounts for the generally held view that, ‘Lagos is special.’

Firstly, it has a sense of rootedness, warmth and identity that generally only emanates from a deep history. Cities that have developed within the secure embrace of defining Medieval walls exude the comfort of conception on a human scale. They also exude an organicism and quixoticism that can’t fail to touch the heart. Meandering lanes and alleyways lead we know not exactly where but at every turn promise surprises and delights, opening up onto picturesque squares that provide the pulse and heartbeat of the social networks that surround them.

Over time, people ‘buy into’ the idea that such adorable places should be nurtured and enhanced, and the seeds of ‘specialness’ that were sown by history are lovingly tended by succeeding generations, to provide a rich variety of blooms.

As with many well-loved locations, nature provided the starting point: a beautiful sweeping bay, with a small cluster of hills at one end, to provide defensible summits. Celts, Phoenicians, Romans, Visigoths, Moors and over thirty generations of Portuguese have all valued this location for varying reasons, as have at least two generations of tourists, attracted by the wonderful array of sandy beaches that also lie nearby. Within Lagos’s bay itself lies the beautiful 4-kilometre arc of Meia Praia beach. Just beyond it to the west extends an enticing chain of cliff-backed beaches, many featuring dramatic freestanding limestone outcrops, cloven from the cliffs and shaped over centuries by the forces of nature.

Having similarly quietly evolved over centuries, the fortified port of Lagos suddenly assumed international significance in the early 1400s, when the third son of the Portuguese royal family, who eventually became known as Prince Henry the Navigator, was appointed governor of the Algarve. With this appointment Lagos entered a ‘golden age’. Prince Henry’s passions for the evolution of navigation, for the exploration of the unknown world, and for the establishment of a Portuguese international trade network led Portugal to the forefront in all of these fields, with Lagos, as the home of his fleet, at the epicentre of all this activity. The Caravel, a nimble shallow-drafted vessel adept at both riverine and coastal exploration, was conceived in Lagos, an Arabian stranglehold on the trade of such valuable commodities as spices was broken, new international trade routes were opened up, and wealth began to flow back to Lagos.

Portugal’s ‘golden age’ as a nation then lasted until 1578, when by an unhappy coincidence Lagos was also associated with its dramatic fall from good fortune.

In that year, a headstrong young king, Sebastian I, gathered most of the nation’s young nobility, a vast armed force of approximately 23,000 people, and about 800 sailing vessels in Lagos and embarked on a disastrous crusade into northern Morocco. Approximately 8,000 of the army were killed with the remainder being lost to enforced enslavement. Portugal was brought to its knees, and was not to regain anything approaching its former stature for the best part of a hundred years.

Much of Portugal’s wealth from trade, both during its golden age and during later periods, was invested in magnificent churches, castles and palaces and Lagos’s best example of this is the unforgettably opulent interior of its Church of Saint Anthony, sumptuously adorned with beautifully carved Brazilian woods, traditional blue and white ‘azulejo’ Portuguese tilework, specially commissioned canvasses depicting the life of Saint Anthony, and vast quantities of gold leaf, once again from Brazil.

Beyond this beautiful building, the architecture of the old medieval-streetplan part of Lagos is largely traditional, historic and harmonious, with much of it dating from the 18th and 19th centuries. External decorative tilework, granite door and window frames and traditional basalt and limestone Portuguese pavements are all features that characterise the area. Also well worth admiring are the remaining sections of city wall and the highly picturesque 17th-century fortress that formerly defended the harbour.

The historic heart of Lagos today is not only a great place to amble and explore but also a wonderful place to eat and drink, with pretty squares strewn with sunshade-capped café tables and atmospheric restaurants serving fresh sea food and both Portuguese and International cuisine. First and foremost amongst the must-eat dishes of the Algarve are the ‘cataplanas’, fresh fish and meat dishes cooked slowly and succulently in their own aromatic vapours with fresh local vegetables and herbs. A cataplana, crusty fresh-baked bread for mopping up, and a bottle of wine, all enjoyed in a charming historic ambience, with views and scents of the sea, is an experience that I’ve luxuriated in on several occasions, fully intend to enjoy on several more, and whole-heartedly and unreservedly recommend.

Up to now, as far as bowls tours to Portugal are concerned, the delights of Lagos have by and large only been available to sample on day-trips, due to the fact that only a single suitable 4-star hotel exists within the area, the Hotel Tivoli Lagos. Although we feature this hotel, and it does offer exceptional access to Lagos, it is unfortunately outside the budget of most touring clubs. The wonderful news that this article has been put together to deliver is that a second 4-star hotel is about to open in Lagos under the management of our principal hotel partner in Portugal, Vila Galé Hotels. The Hotel Vila Galé Lagos will be a 4-star superior property situated close to the 4-kilometre long Meia Praia beach, a short distance beyond the attractive new marina that adjoins the historic centre, and it will open at the end of next month. Amongst its many outstanding features will be a vast outdoor pool and sun lounging area, a fully equipped spa and attractive gardens. Its bedrooms will also be beautifully appointed.

In recognition of our long-established partnership, Vila Galé Hotels have extended an extremely generous ‘opening offer’ to us that will effectively enable us to offer half board for the price of bed and breakfast for as little as £499 for a week long tour including four bowls matches. As far as we know, this offer will only extend until the end of April 2010, at which point rates are likely to increase to a more normal level for a 4-star superior property.