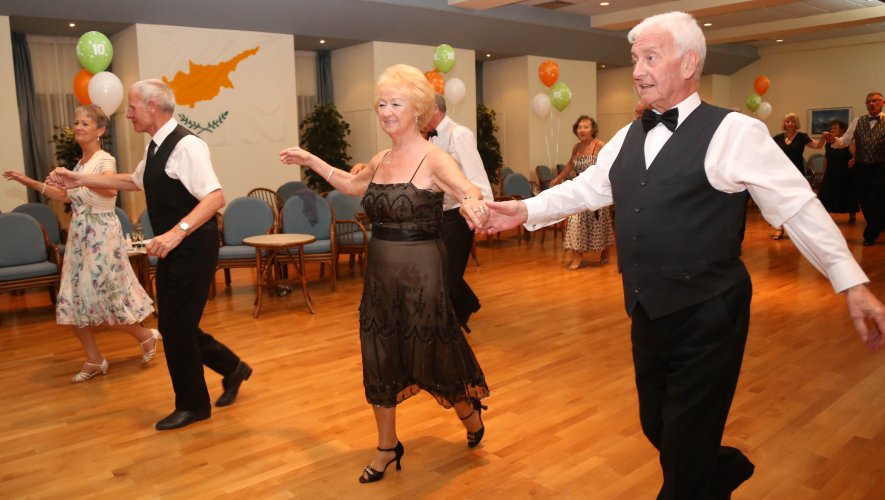 In early November 2015 Graham & Sylvia Barrett hosted their tenth consecutive November sequence dance holiday in Paphos, all in partnership with Constantinou Brothers Hotels and Personal Touch Holidays. Over the years these events have attracted as many as 60 couples at a time, and the basic duration of the event has increased from one week to two weeks, with some people even staying on a third week. This is a wonderful testimony to both the highly popular dance leadership of Graham and Sylvia and the unfaltering high quality of services provided by Constantinou brothers.

In recognition of this achievement Personal Touch Holidays decided to host a special celebratory 10th anniversary evening that Constantinou Brothers were extremely enthusiastic partners in promoting. Our long term Cypriot business partner and friend Marios Kleanthous, sourced a Cypriot dance troupe to provide exotic evening entertainment for us together with a number of extremely large Cypriot flags to decorate the walls of the ballroom. In the UK meanwhile we searched out balloons in the colours of the Cypriot flag with 10th Anniversary messages on them, and in recognition of it being a diamond anniversary, we purchased a diamond pendant to present to Sylvia. Constantinou Brothers meanwhile hosted a cocktail reception and baked a wonderful cake in the shape of Cyprus which was formally presented to the group by the pastry chef himself. On hand to record everything was a professional photographer.

People had dressed beautifully for the evening, and following cocktails, cake, speeches, presentations (thank you Constantinou Brothers for our ‘recognition of long term partnership’ award), and a wonderful exhibition of many of the styles of traditional Cypriot dance, the evening ended as the 10-year-old-and-still-thriving series of holidays had begun back in 2005, with wonderfully enjoyable sequence dancing led by the ever-sprightly Graham & Sylvia (both of whom appear to have drunk repeatedly from the island’s Athena-blessed springs of eternal youth).